Places to ride to from RidersRest… 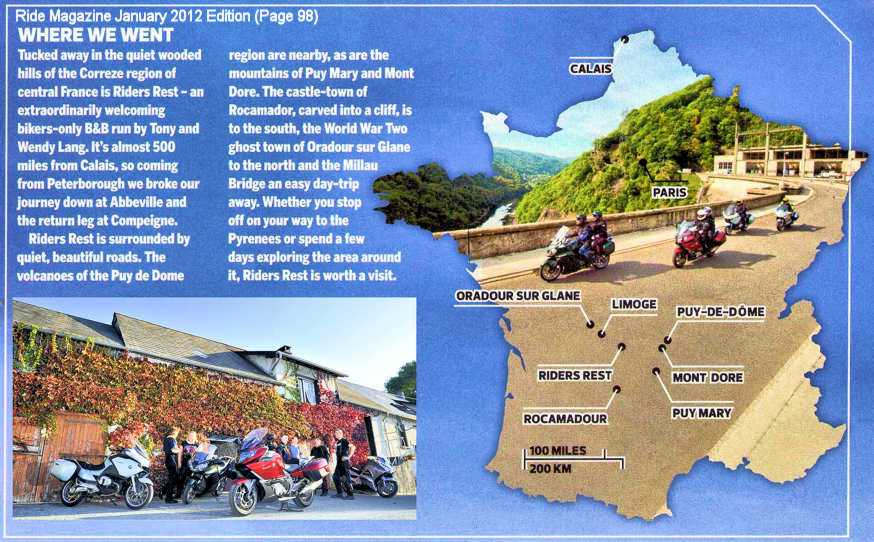 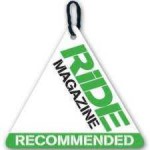 You will find us more than willing to assist in route planning during your stay or for your onward journey and we are competent with most SatNav systems and Google Maps.

If you prefer we can also organise fully guided rideouts from RidersRest for a small fee (usually enough to cover fuel /lunch). These comprise approx 200 miles of superb biking roads from the choices below and take in cafes, fuel stops and the many excellent views along the way.

Built into limestone cliffs, with its medieval houses clinging precariously overlooking the gorge of the River Alzou, Rocamadour is a major pilgrimage site. The town is famed for being the site where the body of St Amadour was discovered near the town’s chapel in 1166, an event which led to a succession of miracles in the town. Dedicated to the Virgin Mary, the town ranks behind Rome, Jerusalem and Santiago de Compostela as a pilgrimage site. Visitors to the town can climb the Grand Escalier (Great Ladder) to the 12th-century Cité Religeuse (Religious City) at the top, which consists of seven chapels. Visitors can also climb the Chemin de Croix (Way of the Cross) for exceptional views of the Dordogne from the ramparts of the 14th-century château. 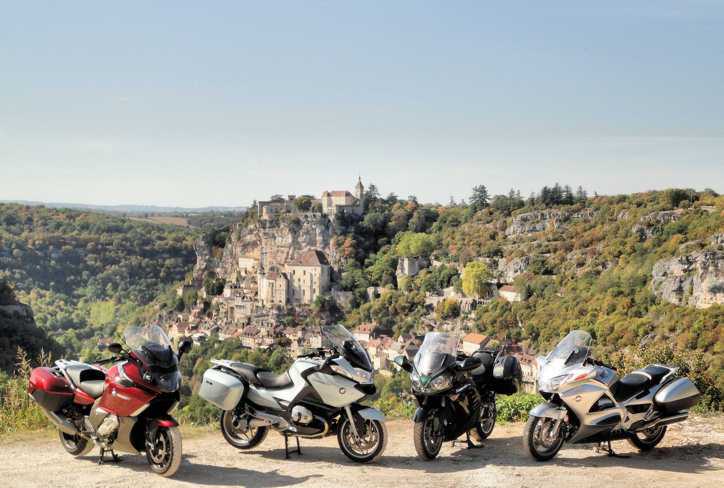 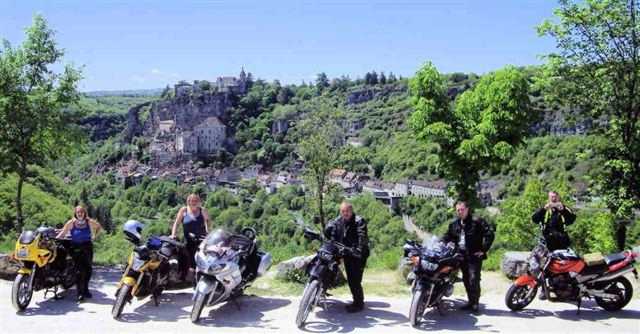 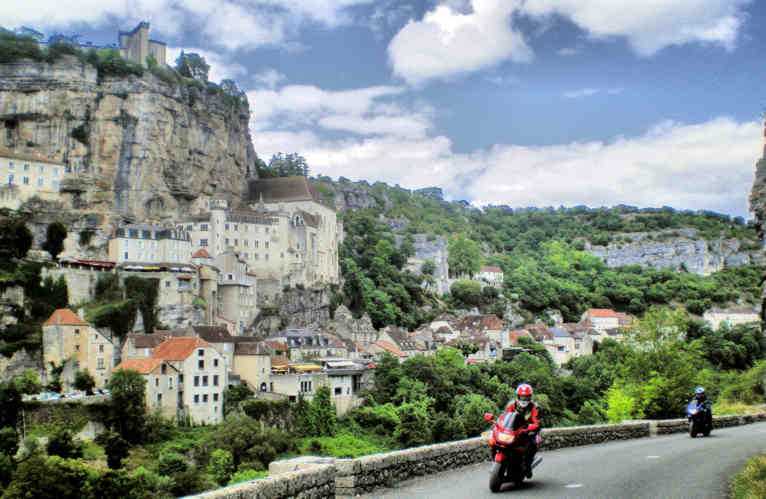 Other attractions nearby include the Rocher des Aigles birds of prey conservation centre, the Forêt des Singes monkey sanctuary and the Grottes de Lacave underground caves.

Sarlat the geographical centre of Périgord-Quercy, is by far the most important tourist site in the region Over a million visitors discover or re discover this medieval jewel every year. This town of l0,000 inhabitants today occupies top spot in terms of tourists and culture. Although this is basically a cultural town, industry is also represented, mainly by food processing firms, many of which produce foie gras. This foie gras, one of the most highly rated in France has contributed to the great culinary reputation of the Périgord in general and the town in particular.

Although it has one of the largest medieval urban areas (13th to 16th centuries) in the world, Sarlat cannot claim a very distant past. The initial Sarlat abbey was most probably founded between 820 and 840 AD by Duke Pepin of Aquitaine. Saint Bernard stopped off in Sarlat in 1147 during his journey through the South of France to spread the gospel to the many Cathars. The plague was predominant at the time. He gave the sick consecrated bread to eat and healed them. This event, this miracle even was commemorated by the building of the strange graveyard lantern which, still today, remains one of the towns symbols.
A warren of alleyways, virtually unchanged since the middle ages, lined with warm ochre stone houses, each with its own distinctive facade and ornately sculptured window embrasures, set off by the stone roofs and turrets, make Sarlat a must for any tourist visiting the Dordogne. Sarlat’s Saturday market is excellent, teaming with life, an unforgetable experience from the street artists that throng there, to the wonderful fresh local produce. 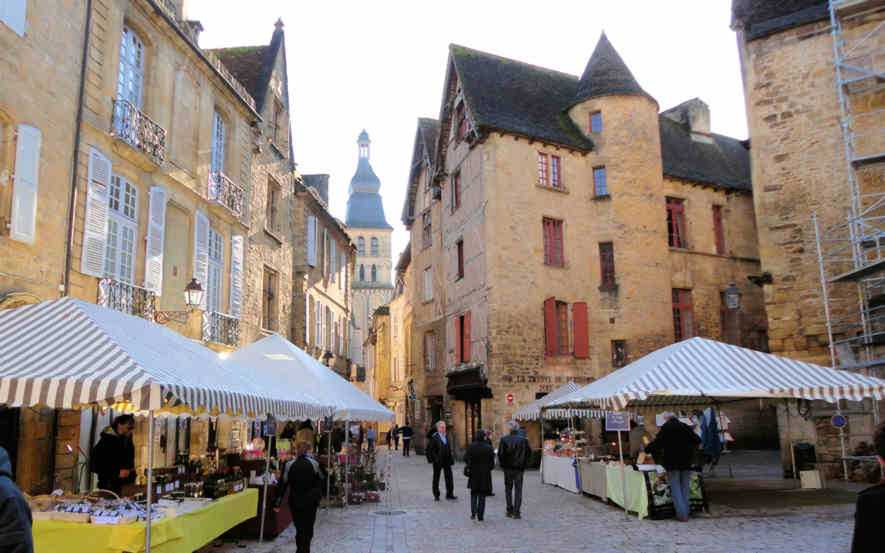 Located in Les Eyzies, on the Sarlat road, Font de Gaume Cave is a showpiece of Magdalenian engravings and paintings from around 14 000 BC. The flints (chisels, scrapers, blades) and other things found in the cave during the excavations testify to a continual occupation since the Mousterian age, or the age of the Neanderthals.

Discovered in 1901 by D. Peyrony, the Cave, 130 m long, contains about 250 paintings. The visitor can only see 30 of them, the most beautiful ones and the best preserved. After 60 m underground, the “Rubicon” is the beginning of the decorated part of the cave, with red dots on the left wall. These caves were not used as dwellings, they were shrines, according to A. Leroi-Gourhan The Grotte de Font-de-Gaume is famous for its cave paintings from the Magdalénien period. It is entrance is 20 m above the valley floor of the Beune valley, at the lower edege of a huge limestone rock.

The cave was first settled by Stone Age people during the last Ice Age – about 25,000 BC – when the Dordogne was the domain of roaming bison, reindeer and mammoths. The cave mouth is no more than a fissure concealed by rocks and trees above a small lush valley, while inside, it’s a narrow twisting passage of irregular height in which you quickly lose your bearings in the dark. The first painting you see is a frieze of bison, at about eye level: reddish-brown in colour, massive, full of movement, and very far from the primitive representations you might expect. Further on a horse stands with one hoof slightly raised, resting. But the most miraculous of all is a frieze of five bison discovered in 1966 during cleaning operations. 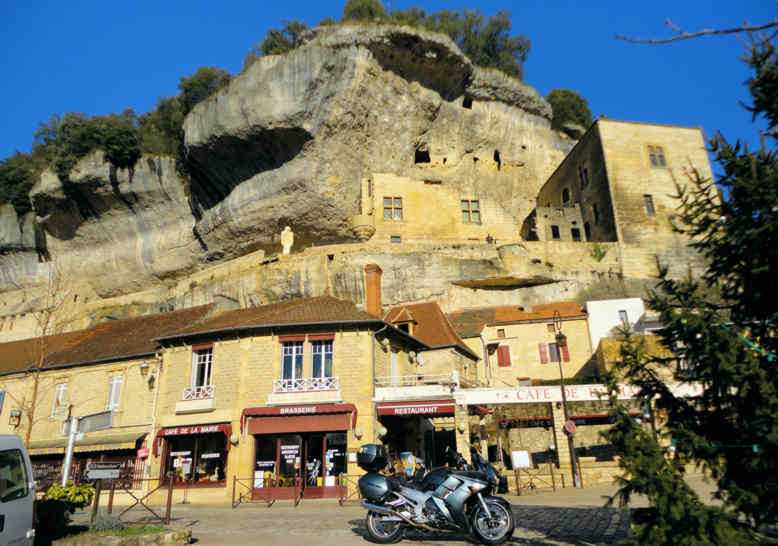 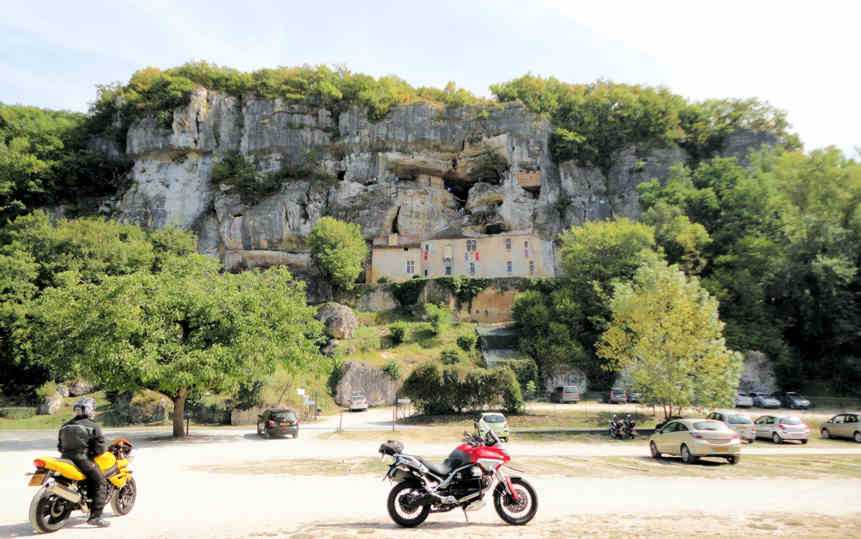 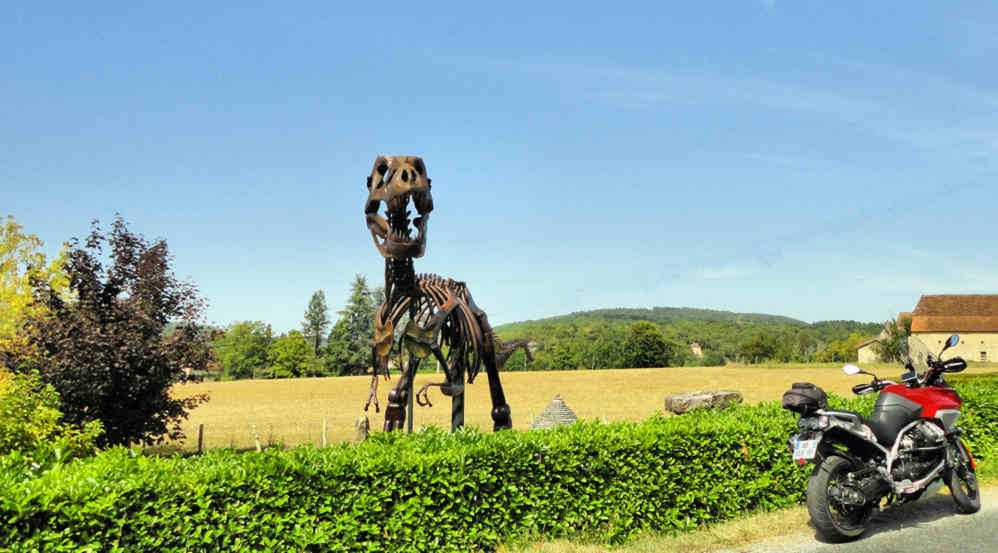 Location: Really out of the way on the D90, 15km north east of Rocamadour. But quite special and worth a trip. Open from 1st Apr – All Saints Day. Open 08.30-18.30 in August without interruption. Otherwise times vary. See website. This spectacular cave complex is impressive on a large scale. Part of the trip is by gondola and the complete trip will take around one and a half hours. Unfortunately not only will you probably spend time queuing to get in, there is the possibility of further queuing inside whilst you wait for a gondola and then later for a guide. But it is certainly worth visiting if you are in the area. 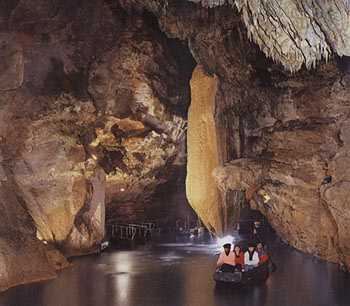 Our recommendations: Very popular so you are advised to get there first thing if at all possible to avoid the queues. Don’t forget your jumper! You could combine it with a visit to Rocamadour. 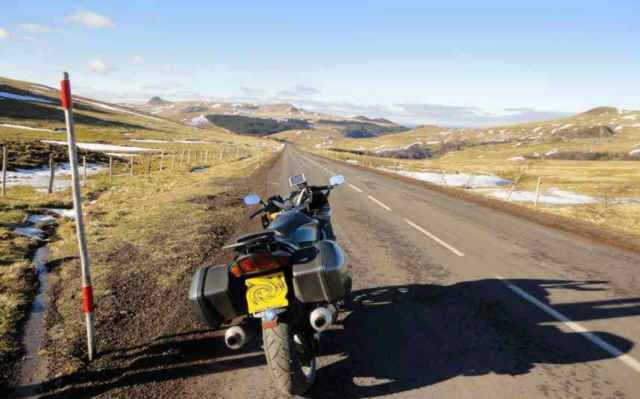 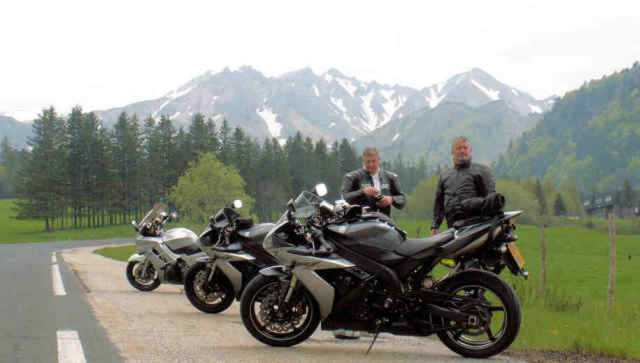 Ride through the romantic Dordogne Stopping at Argentat for Lunch then on through some winding roads and picturesque villages – Collonges-la Rouge – Beaulieu-sur-Dordogne and Turenne Fortress. 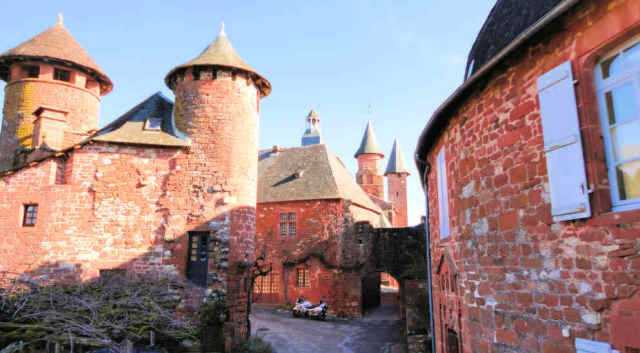 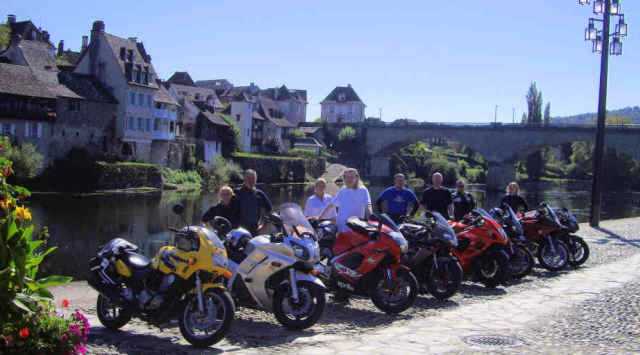 This fairy-tale castle dates from the 15th century and is located in the ‘Parc des Volcans’ region of Auvergne in south-central France, next to (and surrounded by, for it is on an island) an attractive lake. But the castle once stood on a hilltop, with fine views across the valley below! It was between 1942 and 1952 that the dam of Bort-les-Orgues was constructed, and the valley filled with water.

At that time, the castle was owned by the French electricity board, and had suffered from many years of abandon. At the time the dam was completed the local commune of Bort-les-Orgues acquired the castle. It has now been renovated and gained a new lease of life as a popular tourist attraction in the region.

Reached by a walkway, the castle is immediately recognisable by its five towers, each with a different design. There is also a 15th century chapel on the island, the Chapel of Saint Blaise.
Inside the castle, the large rooms of the lower floor are furnished in the rich style of the 19th century, while upstairs is reserved for art exhibitions – Chateau-de-Val is well known for the exhibitions of contemporary art that are held there each summer.
It is also possible to ascend to the roof, for a lovely view out across the lake…. 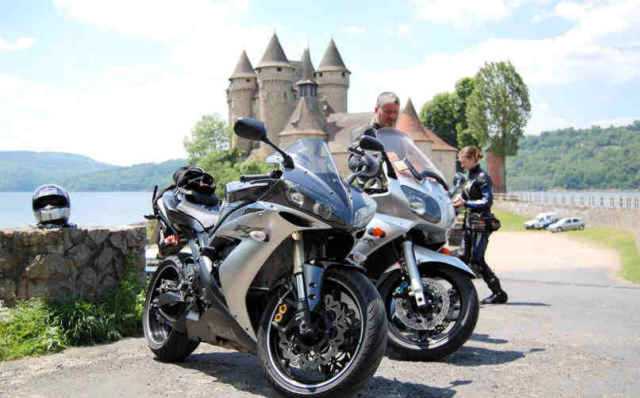 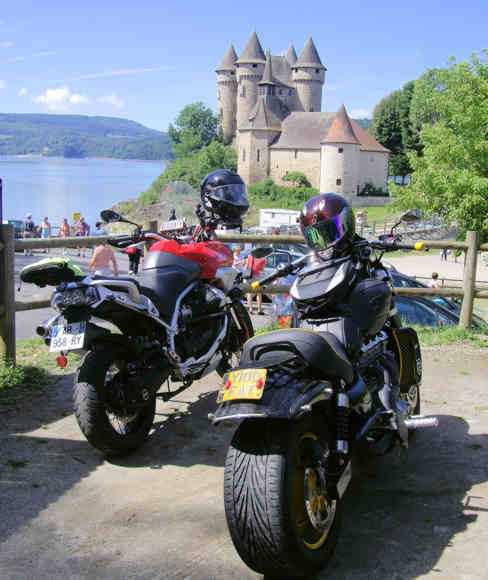 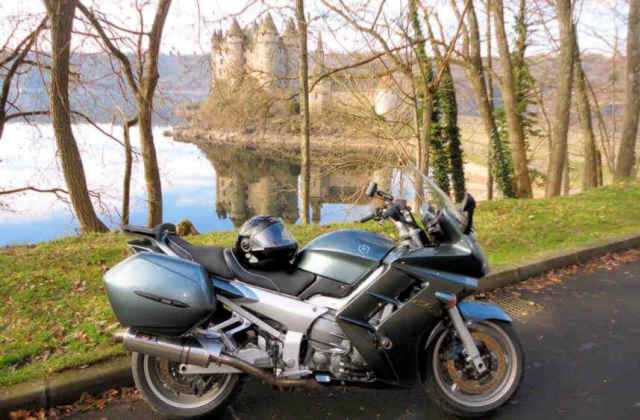 The emblematic pyramid of Puy Mary (1 787 m) proudly oversees the Cantalien volcano which is the largest volcano in Europe (2 700 km²)….

The Puy-de-Dome is a mix of extinct volcanoes, thick forest, rivers, lakes and mountains.
The oldest geological mountain range in France and part of France’s largest national park, the Parc Naturel Regional des Volcans d’Auvergne. Visiting Clermont without going to the top of the Puy de Dôme (1464m) would be like visiting Athens without seeing the Acropolis.

Puy-de-Dôme is a large lava dome and one of the youngest volcanoes in the Chaîne des Puys region of Massif Central in south-central France. Curiously, this chain of volcanoes including numerous cinder cones, lava domes and maars is located far from the edge of any tectonic plate. 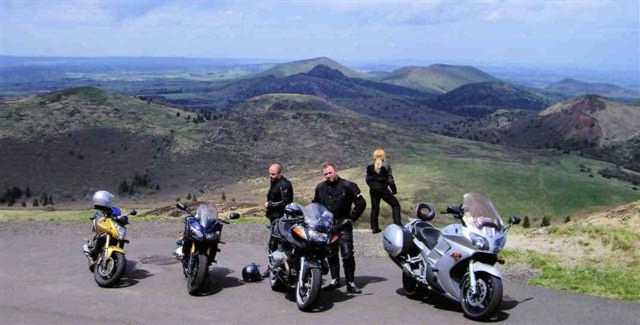 During World War II, the village of Oradour-sur-Glane, on the outskirts of Limoges, was destroyed and its people were massacred by Nazis. The site of one of the most horrific massacres of the Second World War Oradour-sur-Glane is now a memorial to the events of June 10th, 1944. On that day, Nazi troops killed virtually the entire village population – only six people out of 648 inhabitants survived. to tell this crucial piece of history, part of the village remains the same as it was after it was destroyed, with everything left in place just as it was on that day. The cars are still on the street exactly where they were left, furniture still in place in the houses that survived the fires. Oradour-sur-Glane is truly a unique memorial and one that genuinely evokes the meaning of one of the awful events of that time.

The Lac de Vassivière or Vassivière Lake is one of France’s largest lakes, in fact a large reservoir, about 1000 hectares in area,… The D940 up to Payrat-le-Chateau make this a must ride and is one of the most perfect roads for bikes. 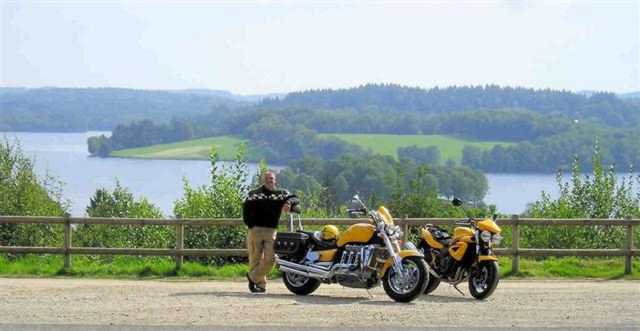 For those of you who don’t know what the Millau Viaduct is, it’s the world’s highest suspension bridge, and one of world’s longest. It opened in 2004, and is located in the mid-South of France, bridging a long valley. The A75 auto-route runs via the bridge. The bridge rests on 7 pillars, and spans 2.5 kilometres (1.5 miles) with a width of 38 meters (125 feet). The tallest portion of the bridge is 244 meters (800 feet)! 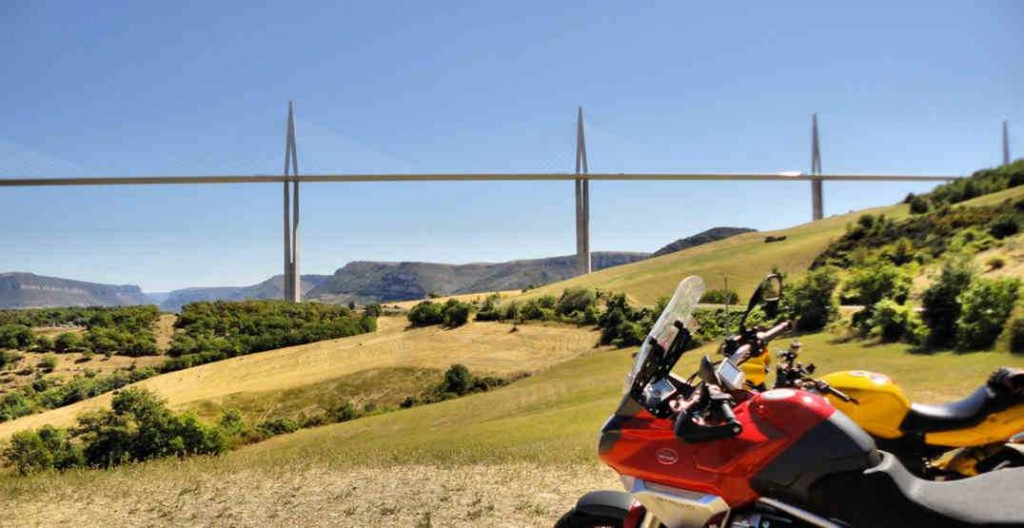 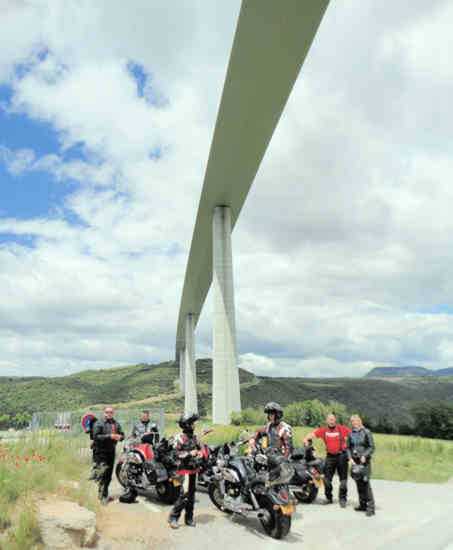 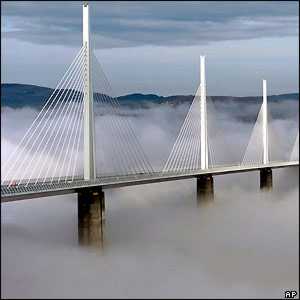 Nine Chataeux in one day

The Dordogne region has many of the finest castles in France, often in spectacular locations, and frequently surrounded by carefully manicured gardens with far-reaching views over the surroundingcountryside. Many of the castles date from the turbulent times in the 12th-14th centuries and the wars between England and France (see Hundred Years War). Also where Richard the LionHeart spent most of his days. 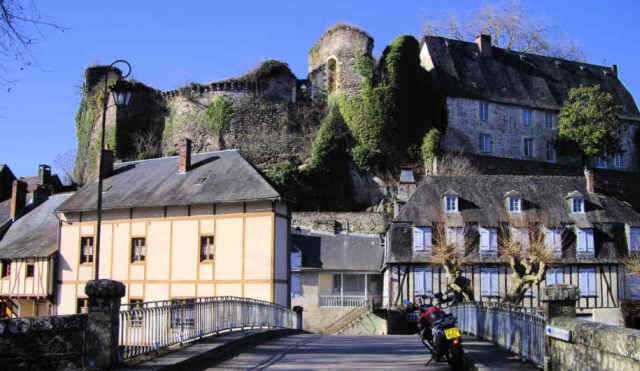