Tour the chateau of Richard the Lion Heart approx 200 mile round trip from RidersRest.

We have compiled a suitable route in our “DiY Tours e-book” for you to use or you can simply create your own with the information below:

Residence of the Princes de Chabanais, 11th century fortified house, building transformed by the Rochechouart family into a real castle in the 13th and 15th centuries, converted into a pleasant estate with Renaissance tastes in the 16th century and then some late transformations and important interior changes in the 19th century. In 1920 passed to the Richemont family who still lives there today.

Perched on a rocky promontory, to this 13th and 15th century fortress was refurbished in the 17th and 18th centuries. The interior courtyard (Renaissance) is embellished with an arched and twisted column gallery. Inside, two rooms house 16th century frescoes. The first shows hunting scenes and the monumental second fresco evokes the Trials of Hercules. Today, the château houses the collection from the Rochechouart Départemental Museum of Modern Art, exhibitions and the Sub-prefecture. 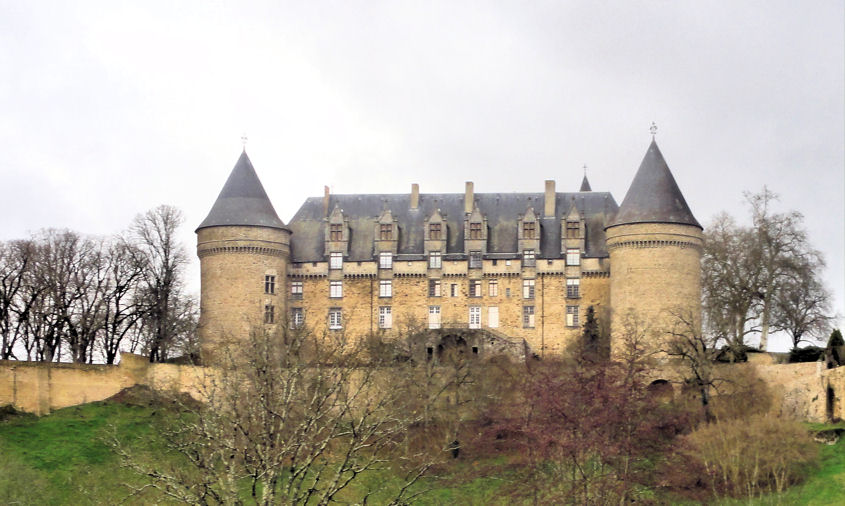 Salles Lavauguyon’s church and its 11th and 12th century priory were placed under the protection of Saint-Eutrope, the first bishop of Saintes. The portal is representative of Romanesque art from Saintes.

To see: 12th and 13th century frescos which represent highly diverse biblical scenes : from the Creation of Adam and Eve to illustration of the Vices, but also the lives of the Saints and portraits of the priory’s founders.
May to September: exhibitions and crafts in the priory, guided or non-guided visits all year (by appointment). May-June-September: 2pm – 5pm Monday, Tuesday, Thursday, Friday July-August: 2:30pm – 6:30pm every day.
Groups: all year by appointment 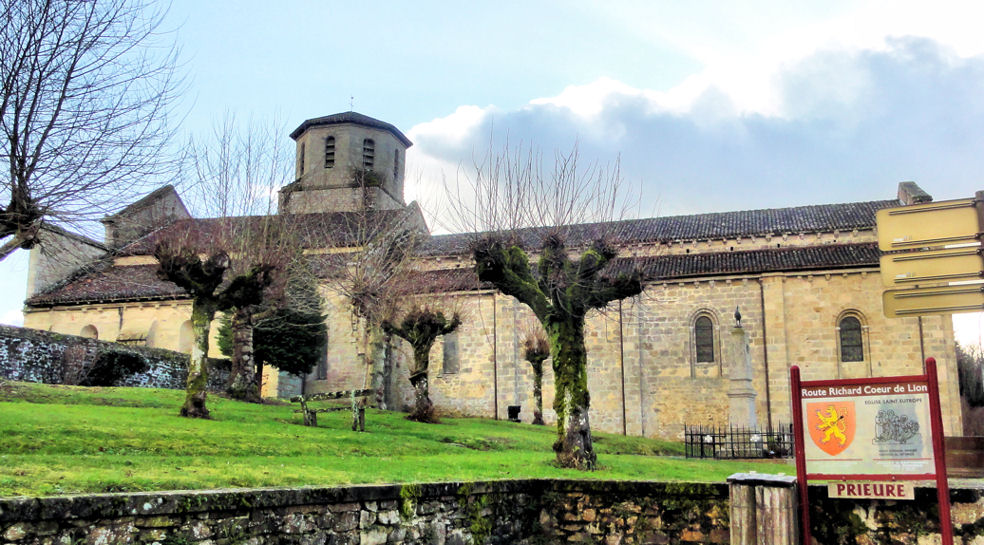 Champagnac la Rivière district.
Lord’s estate built in 1480 to celebrate a prestigious marriage between the Bries and the Hauteforts. Earlier, there were two towers, one of which was the chapel. Château entirely furnished and lived in.

To see: The Gothic door, the granite stairs are finished by palm tree vaults, the Renaissance dining room, the Mirabeau bedroom, the Napoleon III salon… in the garden: the Mediaeval Barn and the “Little World of Automatons”.
– April to October: the château (guided visits) : every Sunday and bank holiday from 2p.m. to 7p.m.
– August: the Little World of Automatons is open every day 2p.m. to 6p.m.
– Groups: all year round by appointment. 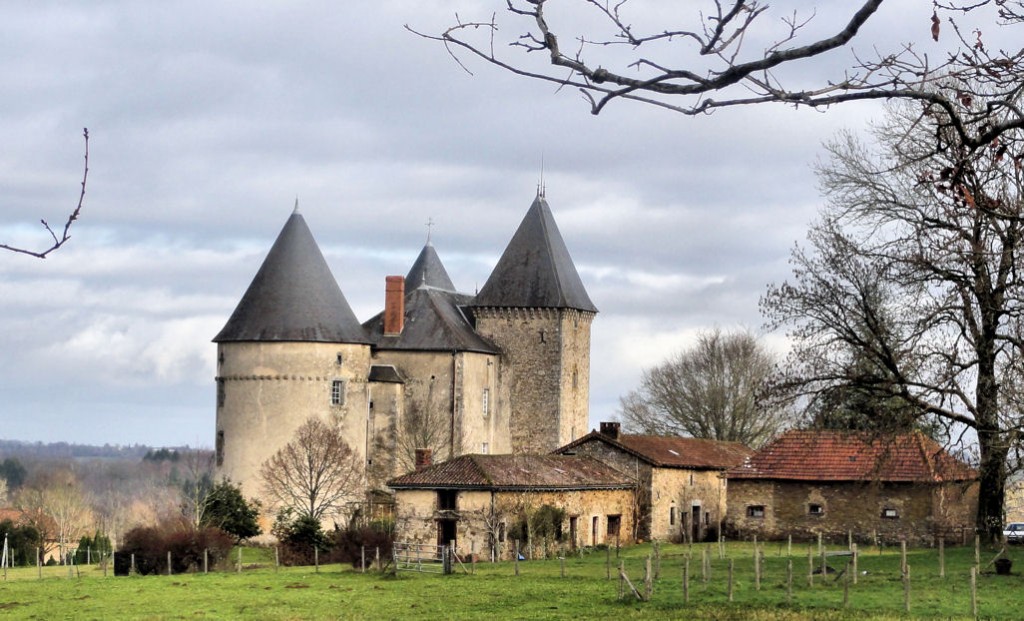 Dournazac district.
Fortified château, representative of military architecture, built in the 12th century and partly rebuilt in the 15th century. Its donjon is 45 metres tall! Destroyed during the Revolution, then restored, it has an interior courtyard with a well, a drawbridge, battlements and machicolations – all for defence…

To see: dungeons and all the reception rooms with their Neo-gothic furniture. In the gardens: Carolingian motte and the chapel.
Guided visits April to September 2pm to 6pm Groups: all year by appointment 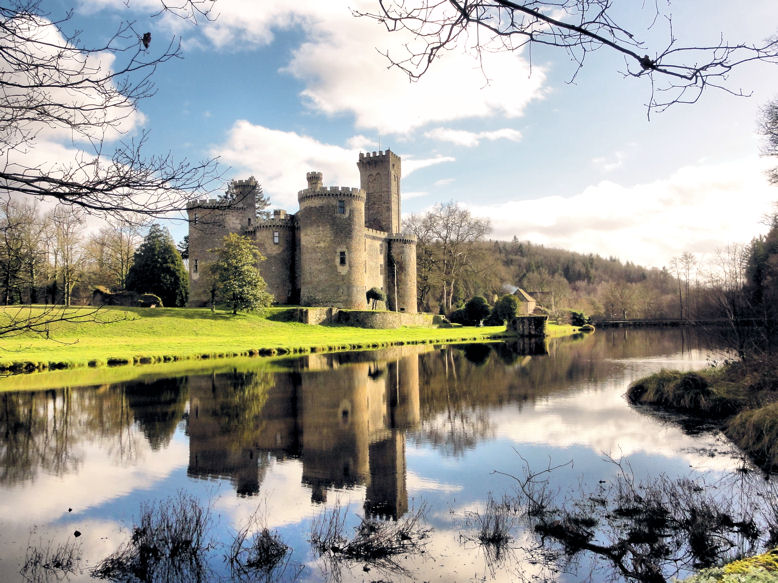 Château built between 1265 and 1275 by Géraud de Maulmont who also built Chalusset. Priest to the French King, he was an exceptional man who, during this time, dominated political and administrative life in the Limousin. The château tower collapsed in 1994.

To see: beautiful paired Romanesque windows of the edifice listed as a historical monument in 1981. Visiting the edifice ruins gives the visitor beautiful viewpoints of the château above. A complete renovation of the site is in progress in partnership with the Heritage Foundation.
July and August: Open 3p.m. to 6p.m.
Visits by appointment – 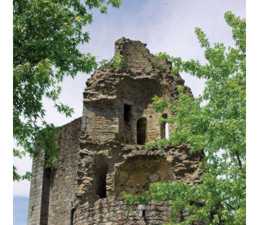 Historically important place where in 1199 Richard the Lionheart was fatally wounded by a crossbow bolt. This château is the symbol of the Limoges Viscounts’ resistance against the Plantagenets. Richard the Lionheart‘s entrails lie in the chapel. It belonged to illustrious families such as : Sully, d’Albret, Borgia and Bourbon.

To see: 12th and 13th century ruins, 18th century estate and the chapel. 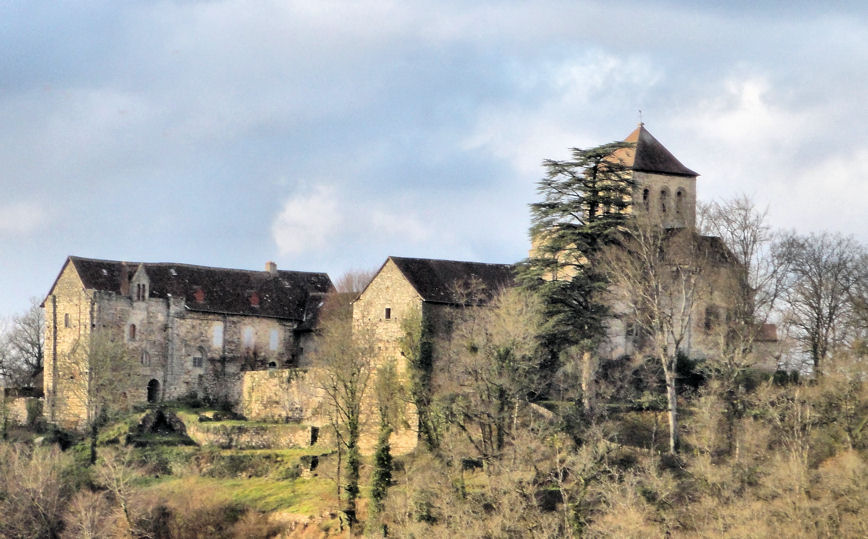 Lord’s domain of powerful alliances belonging to the Pérusse family, important followers of 16th century royalty. Its origins date from the 13th century and is a fine example of the symbiosis of the French Renaissance in Limousin with 16th century military architecture. Rebuilt in 1559 by François des Cars, first Limousin governor. 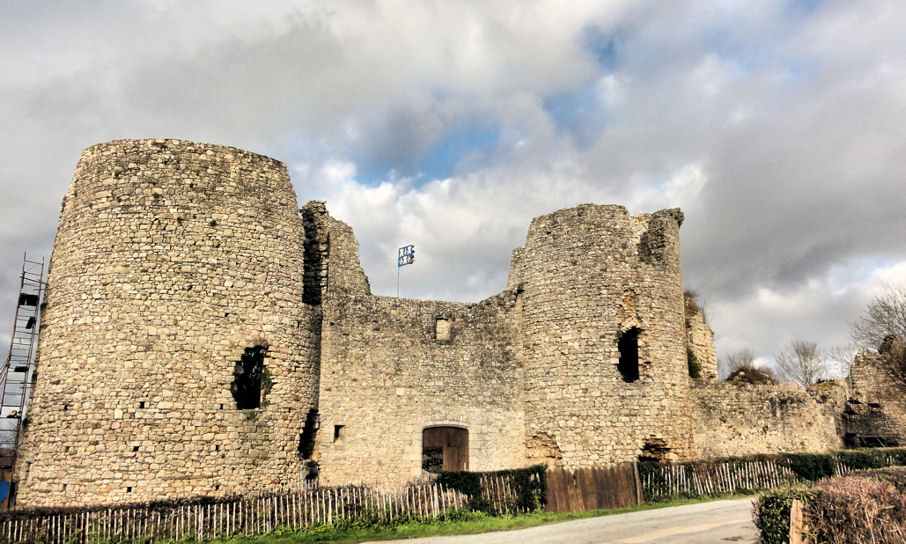 The 17th century château restored in the 19th century has housed the Town Hall since 1986. The stables, near the château, bear witness to the prestigious history of the horse in Nexon. The stud farm existed in the 16th century and is one of the oldest in France and Pompadour is the cradle of the Anglo-Arab breed. 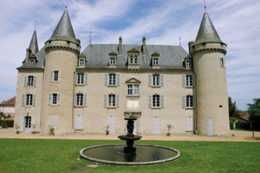 Jewel of Romanesque art, this 11th century church is Saint Geoffroy’s hermitage where in 1088 he had a monastery and a basilica built. At the end of the 12th century, a fortress was built as defence against attacks from the English; first by Richard the Lionheart and then during the Hundred-Years War.

To see: the cut away enamel shrine, the flamboyantly Gothic case and the “craftsmen” monks’ cemetery. Close by, an exhibition traces the gold mining in this valley from Celts up to the 20th century.
June, July and August, guided visits – 3pm to 6pm
Groups: all year round by appointment
Tel: 05 55 09 99 99
E-mail: si.lechalard@wanadoo.fr 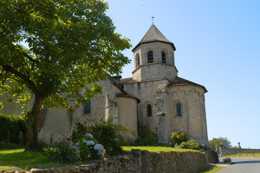 This château built in the 13th century, during the Renaissance and the 17th century, with its magical towers and its terraced gardens traces through Art, History and Architecture, Jumilhac’s destiny. 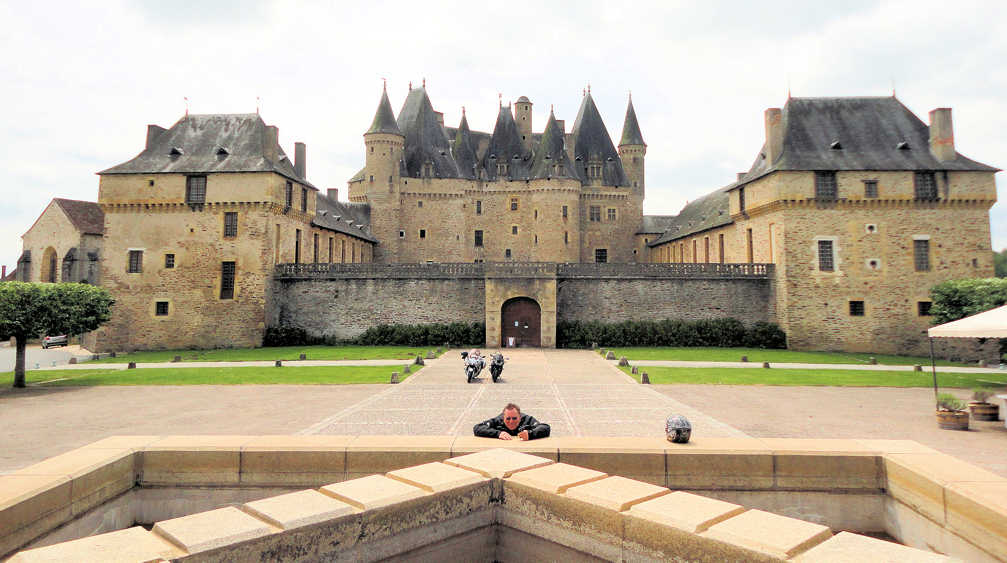 Town of 8000 inhabitants. Around the town, remains of gold and kaolin mine workings. Porcelain museum. Mediaeval enclosure, the remains of the town walls, Plô tower and the vast 13th – 15th century Collegial church. Renaissance houses._ To see : 11th century Bible (library) the Centre for Artists Books, unique in Europe.
Guided visits all year by appointment. 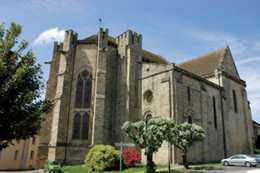 Overlooking the town of Coussac, Bonneval château occupies an important strategic position. A building existed as early as 930. It was rebuilt in the 14th century and refurbished in the 18th. Quadrilateral, it’s flanked by four large, round towers and surrounded by a moat. It’s still owned by the Bonneval Counts and Marquis.

To see: oriental façade with a central, square tower having a double drawbridge. This gives access to a central courtyard which in the Renaissance was decorated with a columned gallery. Elegant west façade with a terrace, remarkable, richly furnished apartments.
15 June to 15 September: guided visits from 2:30p.m. to 6p.m. (last visit at 5p.m.) – Easter, May bank holidays and Mother’s Day. Sound and light first Saturday in August. 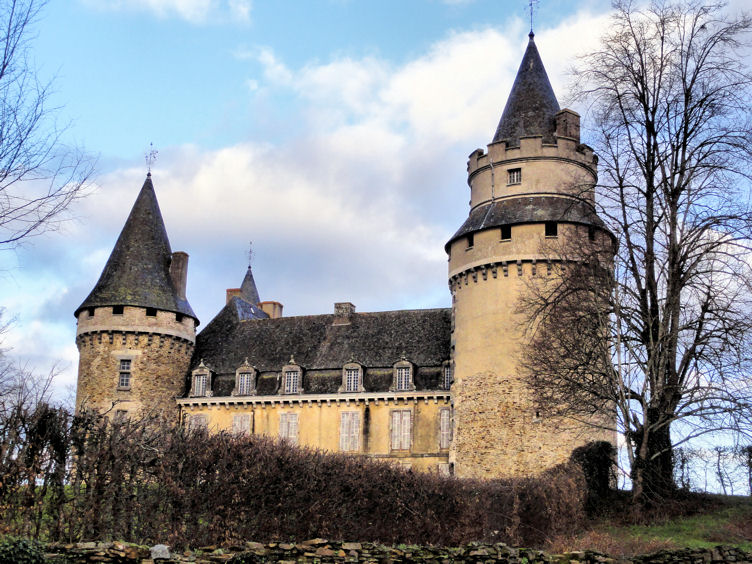 Picturesque mediaeval town, cradle of the first Limoges viscounts and seat of an Appeals Court in the middle of the 15th century. This listed site is one of France’s Most Beautiful Villages. 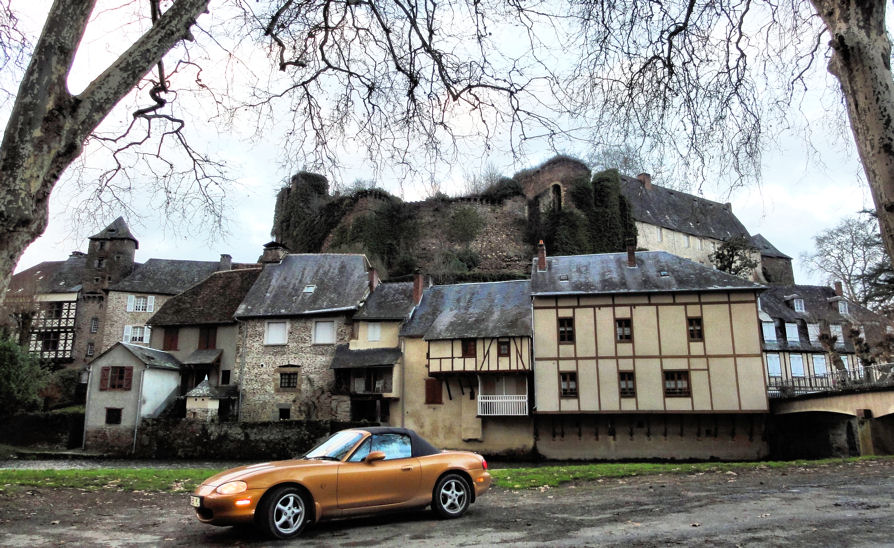 Monumental feudal Château founded in the 11th century by the very noble Lastours and Pompadour families, modified in the 15th, 18th and 19th centuries. It was given by King Louis XV to his favourite, the famous Marquise de Pompadour.

To see: The Château overlooks one of the oldest racecourses. With its numerous stables allotted to stallions, its mare farm La Rivière, unique in France, the Pompadour National Stud farm has an essential role regarding breeding and competitions in all disciplines. 12th-13th century Romanesque church in Arnac and Chapelle St Blaise of which the nave ceiling and walls are covered by a monumental fresco by the artist André BRASILIER.
Guided visits Tourist Office Tel: 05 55 98 55 47
Website: www.pompadour.net 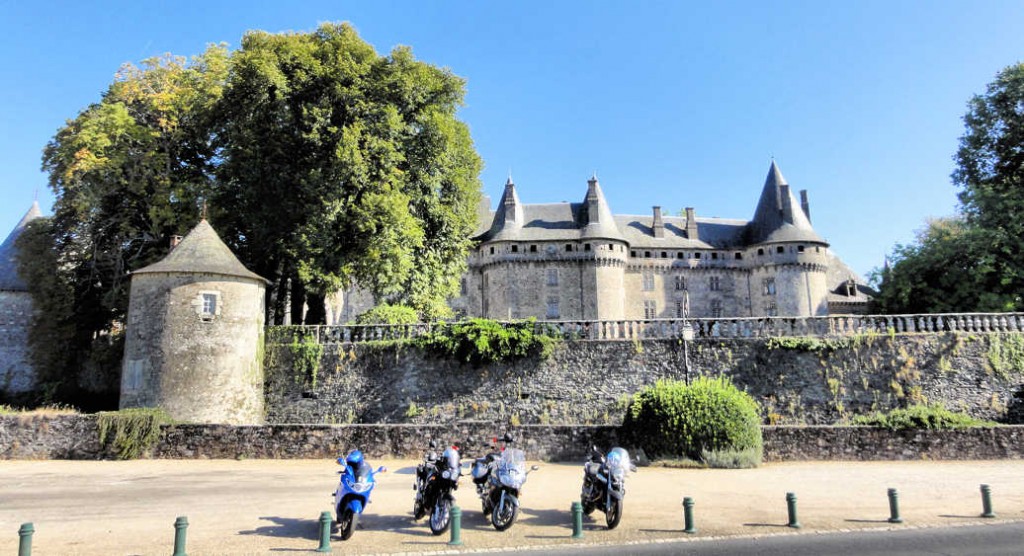 Châlucet mediaeval fortress is a major feature of the Limousin’s heritage. Built on the summit and slopes of a rocky spur; two fortifications: low Châlucet is the oldest (12th to 16th century) with the famous “Jeannette Tower” and high Châlucet (13th century) both a military place and a luxury residence; demolished by the Limoges Consuls at the end of the 16th century. One of the most beautiful ruins in France; on-going archaeological dig and strengthening works. 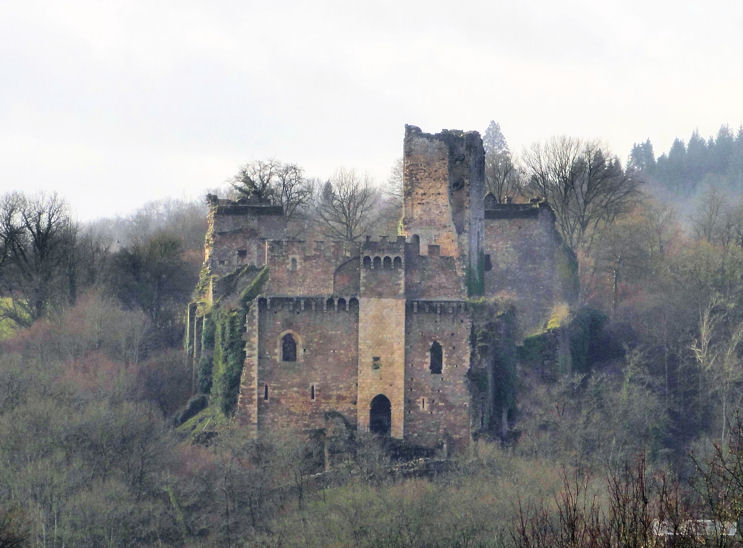 One of the oldest and most remarkable churches in the Limousin; monastery founded by Saint Eloi in the 7th century, pillaged and destroyed, then re-established from the 11th century. Very prosperous in the 12th and 13th centuries; church and buildings ruined anew during the Wars of Religion and then built up again in the 17th century. It was an abbey until the Revolution; late transformations during diverse affectations. 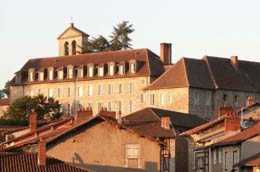